This isn’t related to any of the books we’ve discussed in class, but I found this book and comic online, (I found the comic first, then found the book). Both the book and webcomic are titled The Weight of Our Sky. The book is written by Hanna Alkaf, Nisrina A.N.

The story takes place in Kuala Lumpur, Malaysia during the race riots in 1969. The main character, Melati Ahmad, is a young girl with OCD struggling to get back to her mother. From what I have read, I really love this story; I’ve learned a lot from the story already, the main character is interesting and sympathetic, and there’s an interplay between religion/myth and mental illness that reminds me of some of the other books we have read this semester.

So far, I have only had the opportunity to read the comic on an app called Webtoon (which is a free site you can access on your phone and possibly on your computer), but the book was published this year and out on amazon, if you want to check it out. (The first image is the front cover, the second are illustrations from the comic).

Something to Check Out In Your Spare Time (assuming you have any):

Our class through memes 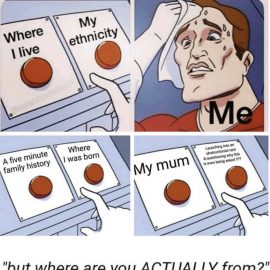